Beirut port blast: Transitional justice, a way to break the cycle of impunity

“Five days!” This was the populist promise of a swift investigation, made by the Interior Minister Mohammad Fahmi in the aftermath of the Beirut port explosion on Aug. 4, 2020.

Two years later, as the collapse of some of the port silos reawakens the nightmare of that moment of horror, impunity remains the order of the day.

The lead investigating judge on the case, Tarek Bitar, who took over the file after the dismissal of his predecessor Judge Fadi Sawan, has been hampered by ominous political maneuvers, which still favor the “strategy of amnesia,” aiming to gradually lift the weight of accountability from those responsible for the blast.

After all, how could authorities who were never worried about war atrocities and crimes against humanity committed during the 1975-1990 Civil War (thanks to an unconditional self-proclaimed amnesty in 1991) now worry about what they themselves consider to be a “series of negligent and incompetent acts, accumulating over the years at different levels,” to quote President Michel Aoun in his speech last year commemorating the first anniversary of the tragedy.

For their part, the judicial authorities also failed to assess the enormity of this earthquake that shook the Lebanese capital.

At first, things seemed to go in the right direction. The government decided on Aug. 10, 2020 to refer the port blast file to the Judicial Council — a special body dedicated to crimes undermining the country’s security — in lieu of the military court. This was despite the council’s serious shortcomings in adhering to fair trial principles.

It was also ludicrous to entrust a case of such magnitude to a single investigative judge and a handful of clerks — a decision that was not re-assessed or questioned.

Even requests to internationalize the investigation efforts went unheeded. The day after the tragedy, I wrote to the Secretary-General of the United Nations to urge him to activate an existing mechanism that has empowered people in his post since the late 1980s to investigate allegations of chemical weapons use.

The suspicions that this gigantic stock of ammonium nitrate, irregularly stored at the port of Beirut since 2014, was being trafficked to Syria in the midst of the Syrian war should have prompted him to activate the mechanism, or even to connect the blast to the investigation mechanism, adopted by the UN Security Council in 2015 to identify “to the greatest extent feasible individuals, entities, groups or governments perpetrating, organizing, sponsoring or otherwise involved in the use of chemicals, including chlorine and other toxic products, as weapons in Syria.”

Given the few achievements from the Lebanese justice system, entangled in its contradictions, and the lack of cooperation from the international community, perhaps the time has come for Lebanon to explore new tools to activate truth-seeking processes and to truly recognize the suffering caused to the blast’s victims and their families.

Actions under the umbrella of transitional justice could provide a framework to respond to the vital “right to know” of Beirut residents and the victims.

This right is not alien to Lebanon. In 2014 the Shura Council recognized that the families of those who disappeared during the Civil War have the right to know the fates of their loved ones.

By transitional justice, we mean measures taken to know the truth, acknowledge responsibility and offer apologies and reparations for past injustices with the aim of ensuring real reconciliation.

This field of action goes back to the framework set by President Nelson Mandela working to pacify South Africa after nearly 50 years of apartheid.

South Africa’s Truth and Reconciliation Commission was a conceptual innovation that anchored alternative modalities to more conventional judicial practices, one that acknowledges the dignity of victims, while pointing the finger at those responsible for atrocities.

Lebanon has always been against any mechanism remotely related to transitional justice, but the devastation of swathes of a capital city in a few seconds could be the founding moment for the country to end the cycle of impunity for its leaders.

To start such a process, it is not necessary to reconstruct the entire gigantic puzzle of the case, which could be based on the smallest part of the undisputed facts of the tragedy, namely the first report of the fire that broke out in the port and was filmed and shared on social media at 5:54 pm, causing one explosion at 6:07 pm and a second explosion 35 seconds later at 6:08 pm.

During these 14 long minutes, no political, military, security or administrative officials — although aware of large quantities of ammonium nitrate unsafely stored in the port — saw fit to warn the population to seek shelter.

President Aoun confirmed that he was informed of the presence of the explosive material on July 20, 2020. Former Prime Minister Hassan Diab said he knew on June 3. The concerned ministers and security officials, including then-Army Chief Gen. Jean Kahwaji were also aware of this.

In view of the ongoing judicial paralysis, the likelihood of expecting indictments for “manslaughter” and “non-assistance to persons in danger,” is not great.

This is where a parallel process of transitional justice would come into play, establishing a framework for enhancing the expectations of the victims without having to comply with the procedural requirements of criminal courts, and without overshadowing the judicial proceedings in progress.

No authority necessarily has a monopoly on launching such an initiative: MPs, journalists, activists, families of the victims — any institution or group of institutions could mobilize and exert enough political and social pressure to challenge the political class’ criminal negligence.

This being said, the independent administrative authorities that have recently emerged in Lebanon (the National Human Rights Commission and others geared towards anti-corruption and the disappeared) have the necessary tools, notably the prerogative to form independent fact-finding bodies, to reach such goals.

In concrete terms, the establishment of a commission under transitional justice would bring the officials who were aware of the presence of the ammonium nitrate stockpile to recount — publicly and individually — their actions, moment by moment, during the 14 minutes of the fire preceding the explosion, before publicly apologizing for their negligence.

These testimonies could even take the form of depositions submitted to the Judicial Council — if it is ever allowed to resume its proceedings — and could be used as extenuating circumstances in possible indictments, as Lebanese legislation already allows.

Such measures revolve above all around the concept of political and moral wrongdoings while rejecting any direction towards amnesia for the acts committed. They also sustain the victims’ “right to know” and quash any possibility of an unconditional amnesty or statutes of limitations for the offenses.

This is not an easy feat. But the track of transitional justice offers the advantage of broadening the field of mobilization beyond the sole judicial instance, whose pace does not necessarily reflect the immediate expectations of a population who fell victim, yet again, of another atrocity.

Karim El Mufti is a visiting professor at the Saint Joseph University of Beirut and an international expert for justice and security affairs.

Shrinking Democracy in Lebanon: How a Securitised State of Emergency Is Threatening Democratic Norms

Lebanon is experiencing the most crushing challenges in its 100 years of existence. In the wake of the covid-19 pandemic and the 4 August Beirut explosion, national authorities have resorted to highly controversial martial law regulations in the form of the General Mobilisation Plan (GMP) and declaring a State of Emergency (SoE). Such measures are unprecedented despite regularly experiencing exceptional circumstances, triggered by both internal and external factors.


Worldwide emergency measures to counter covid-19 have disrupted the foundations of democratic principles and the rule of law, during a time when democratic practices were already at risk in many countries. As feared by thinker Amartya Sen, “the world does face today a pandemic of authoritarianism, as well as a pandemic of disease, which debilitates human life in distinct but interrelated ways”.[1]


SoE legislation, as framed and implemented in Lebanon, is threatening democratic principles and the rule of law. It has affected the basic rights of citizens and the aspirations of the protestors who took to the streets in Lebanon in October 2019, demanding dignity, good governance, and social justice from their government. To protect these rights, the political factions in power need to abandon the securitisation approach in addressing people’s well-being in the context of the covid-19 pandemic and abide by national and international law. Decision-makers should correct this course of action and engage in crucial reforms to strengthen the legislative branch and the independence of the judiciary to play their crucial role in ensuring checks and balances against the emergency responses. At the same time they need to overturn corruption and unconstitutional practices.

Influence and success of the Arabic edition of UFO Robo Grendizer: Adoption of a Japanese icon in the Arabic-speaking world

Available on this link

UFO Robo Grendizer, a Japanese anime character produced in 1975, was immensely popular in Arab countries. Adapted into Arabic in Lebanon as it was enduring a devastating civil war, the program was broadcasted in 1979, then during the 1980s across many Arab audiences (mainly Syria, Jordan, Egypt and the Gulf).

The cartoon’s narrative of alien invasion and heroic resistance, using cutting-edge technology in the form of Grendizer the super-robot, mirrored the harsh reality of war and occupation that so many Arab populations endured during the same period.

This paper aims at uncovering why Grendizer struck such a profound echo in the minds and hearts of the generation of children who found in the character a super hero figure as an escape route to their world’s problems. It will also address the impact of this Japanese cultural reference onto Arabic audiences and highlight how the cartoon came to be domesticated for an Arab context, thus leaving its original universe and encompass the mindset, reflections and expectations of many Arab generations. 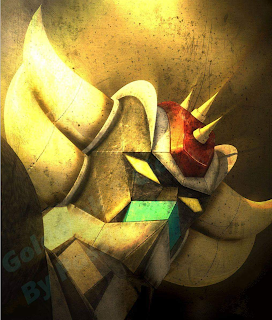 The Beirut Enterprise
The Beirut Enterprise is a space created by Dr. Karim El Mufti, a research scholar specialized in the social science school of state-building in multi-sectarian societies, such as Lebanon and Bosnia-Herzegovina. He collaborates regularly with many international, regional and local institutions in the Levant, as a senior researcher on Justice, Security and Human Development, and has been teaching in various universities in Lebanon and Europe. He remains very active in the field of civil society in defense of basic human rights, youth empowerment and socio-economic development in the Levant region.

A free thinking circle in Lebanon